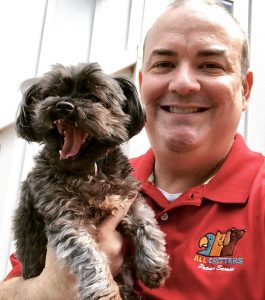 Joey grew up in Eastern NC and, after living in Charlottesville, VA for a short time; now calls Raleigh home.

After working from home for a small publishing company for seventeen years, Joey took on a part-time job as a petsitter with a local pet sitting company to be around animals more and to add a little variety to his daily ho-hum schedule.  His first day pet sitting he realized this was what he should have been doing all along!  He decided right then to start his own company where he could be his own boss while doing what he loves best…looking after animals.  Shortly after, All Critters Petcare came about.

Over the years he has cared for everything from reptiles to spiders to ferrets and parrots…and even a few cats and dogs along the way! He has a lifetime love for all animals and now shares his home with two cats, Abby and Betty and a python named Noodle.

Joey is a Certified Professional Pet Sitter (CPPS) through Pet Sitters International (one of the few with this accreditation in the Raleigh area).  This means he’s been trained for a broad range of petcare best practices.  He regularly participates in ongoing training and classes and passes this info onto his staff.

He and his team are very much looking forward to taking care of your pets and giving them the best care possible. 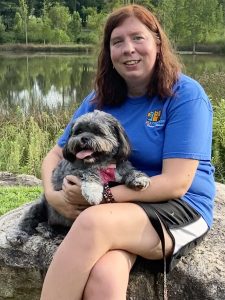 Melissa was raised in Carolina Beach, North Carolina. She came to Raleigh in 2004 to attend William Peace University where she earned her BA in English and Communications.  After graduation, Melissa attended East Carolina University to earn her MA in Middle School Language Arts.

Melissa spent eight years working with orphans, wards of the state and the homeless as a Case Manager and Intervention Specialist at many different organizations.

Melissa loves animals and has owned quite a few over the years including guinea pigs,  dogs, cats, fish, turtles and frogs.  She has a real heart to help others and a deep passion for animals.

Melissa came on board at All Critters in 2017 as a sitter/dog walker and became their manager in late 2020.  She loves working with the clients and their babies.  Melissa has a five year old Llapsa Apso named Djinn-Djinn. Melissa is excited to be on board and she looks forward to caring for your furry or scaly friends! 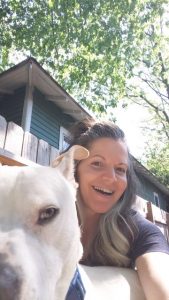 Stephanie was born in the North but raised in the South. She has lived all over NC for most of her life and moved to Raleigh in the summer of 2017 with her fiancé Bill.

After working in Retail Management for over 30 years, she is taking a break to spend more time doing things she enjoys. Traveling, hiking, painting, seeing live music and spending time with family & friends.

She has had a variety of pets growing up. Snakes, bunnies, fish, hamsters, hermit crabs, cats and dogs. Her current rescued fur babies are Banjo – a 2 year old Pittie mix and Sam – a 17 year old orange kitty. They are the loves of her life (except for Bill of course ;0)). 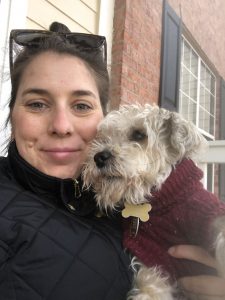 Erin was born and raised in Eastern, NC. She moved to Raleigh in 2013 after receiving a BA in Photography and minor in Art History from East Carolina University. Erin grew up with two basset hounds (Chloe and Hootie) and a cat named Frisky!

When not at her fulltime job as a Facilities Management Analyst she enjoys reading, live music, photography, kayaking and beach trips.

Her beloved dog of 8 years Lulu passed away in March . Pet sitting has allowed her to get all the furry friend love until she is ready to adopt another dog.

Erin joins the team with over 8 years of pet sitting experience.

Be prepared for all the photos attached to your journals when Erin pet sits. She has been known to give your furry loved ones a photo session during their visit. 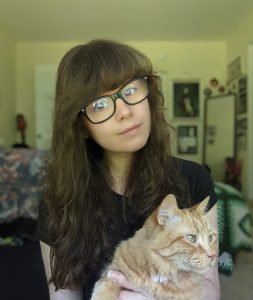 Dawn was born in Texas but spent most of her life in Florida where she attended St. Petersburg College for music education and volunteered with pitbull and greyhound rescue groups. She moved to North Carolina in 2010 where she got her grooming certification from Penn Foster and volunteered at WCAS as well as a nonprofit feral cat rescue program.

She currently lives in Clayton, NC and is working on getting her dog training certification. She had dogs (beagles) growing up as well as a flying squirrel and two sugar gliders! She currently lives with two lovely cats: Orangey (a rather round orange maine coon) and Apollo, a marbled tabby.