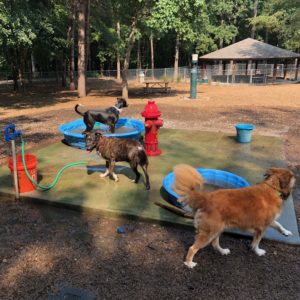 With a recent article on WRAL detailing plans from city officials to increase the number of Raleigh dog parks, it might be a good time to check out what the city already has on offer.  Raleigh is well-known for its human-friendly green areas.  From William B. Umstead State Park to the inner-beltline Lions Park, it has relatively few spaces dedicated for the largest grown demographic of the city; our canine friends.

While new dog-friendly pop-up parks might be on the way soon, there are plenty of Raleigh area dog parks to enjoy in the meantime.  Here is what you should know before grabbing your leash and taking Fido on a field trip. As a bonus, we include a list of our favorite dog parks in the Raleigh (and surrounding) areas.

Have you ever tried to maintain a routine of going straight from work to home and back again with no breaks for excitement or entertainment? Of course not! Life is about enjoying new environments and getting together with friends to relax and have fun.  Your dog feels the exact same way, except they don’t want to go to parties or concerts to have fun.  They want to get out and run around with you and other furry friends.  That’s why dog parks are so important for your dog’s routine.  Dogs who stay home with just the occasional trip around the block can become depressed and anxious.

The benefits aren’t just for your pup, but for you as well.  Not only is it nice to take a break from playing tug of war with the leash, but you also get to meet other pet parents who share your passion for pets!

What to Be Aware Of

Dog parks come with many benefits.  However, there are things you should be aware of.  Along with the free socialization and open playing spaces comes the possibility of injury, communicable diseases, and the likelihood of aggressive interactions. A dog park is also the perfect area to pick up an illness. Many pets come together in an area that isn’t sanitized between uses.  Because of this, it makes picking up a parasite, or infection a possibility.

In a March 2018 story on CBS17, several local pet parents had become concerned their dogs had picked up a contagion after visiting the Oakwood dog park. They reported their dogs vomiting in the weeks to follow with no known cause for the illness.  Several pet owners had reported illness in their dogs, following a visit to the Oakwood area dog park.  The owners cited the shared drinking water at the park as the source, despite efforts to keep the space clean. While the pets who became ill did not suffer serious harm, this episode just highlights the need to only bring your pets to the dog park if they are fully vaccinated and otherwise healthy.  This way they can fight off any possible infections being passed around the playgroup.

Another risk factor possible whenever you bring together two or more furry family members is the possibility they won’t become friends. There is also the possibility for play to become too rough for some. Dogs who generally are very friendly can have a disagreement that can result in a quick warning snarl and snap, and not all visitors to the dog park are guaranteed to be perfectly socialized. Always keep in mind that your dog could either be part of an altercation or cause a disagreement when playing with other dogs. Always be sure to have a plan in place, should a fight break out.

Finally, even dogfights that do not require the first aid kit may have lasting effects on your dog.  There are a lot of sounds, smells, and activity at the dog park.  This can cause sensory overload, even for dogs that are otherwise well socialized.  Keep an eye on your pup’s body language to make sure they are enjoying themselves.  If they are crouching low to the ground, have their tail stuck between their legs, the whites of their eyes are showing, or they are shrinking from other dogs approaching, the dog park is not their cup of tea.  Remove them from the area and try to find an environment that is less overwhelming for them.

If you try to just make them get used to a situation that they are afraid of, your dog may develop a lasting phobia of dogs, parks, or being approached by strangers.  Always make sure your furry friend is having fun before leaving them on their own.

Always try to separate by size: Many Raleigh dog parks, like Oakwood, Millbrook, and Carolina Pines dog parks all offer fenced areas for both small or large dogs to play separately.  Make sure all dogs are similarly sized so they are less likely to be intimidated and react with aggression.

Remember to stay close until you know how your dog will interact with a particular group of dogs.  That way you can help diffuse any potential escalating interactions.  Pay particular attention to any new dogs that you and your dog are unfamiliar with.  Want to know what an escalating dog interaction looks like? Check out this helpful (and illustrated!) resource detailing what escalating aggression might look like.

Due diligence before you unleash:  While Raleigh dog parks are known for their excellent upkeep, it is important to be aware of the state of the park.  Be sure to walk the perimeter with your pooch to make sure there are no gaps. Check out the posted rules board in case there is a unique rule while visiting. Make sure there are supplied poop bags before it becomes squatting time (in case they have run out). These steps are important to determine if this area is the right one to let your pooch explore.

Also, check out our article on Raleigh Dog Parks and dog parks in Cary.