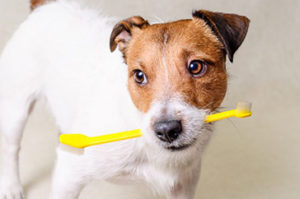 February is National Pet Dental Health Month so we thought we’d spend a little time this week talking about what you can do to help keep your dog’s teeth clean and healthy.

Neglecting your dog’s teeth can lead to many serious health problems, the least of which is bad breath.

The most commonly known to most people is heart disease and infection in the heart valves.  Bacteria from your dog’s mouth travels to the heart where it can cause bacterial endocarditis, causing permanent damage to the cardiac tissue and lead to heart disease and failure.  Other serious issues could be liver abscesses and sepsis, where bacteria enters the blood stream.  Both can be treated but it’s very expensive and often not successful.  Because of painful teeth and difficulty eating, many dogs will develop poor appetites which can lead to even more problems.  And lastly, osteomyelitis, a painful bone infection can lead to a broken jaw that is very difficult to heal.

With so many possible health problems possible, it’s a wonder that people don’t spend more effort trying to keep their dog’s teeth healthy.  The reality is that many people, especially when they get a new puppy, may start brushing their dog’s teeth but quit after a while, either because they get tired of doing it or because the dog isn’t “cooperative” and they give up. This is unfortunate because when done regularly it’s usually not quite the chore some people think it is.  I started brushing Bailey’s teeth the day after I brought him home at 9 weeks and I’ve brushed them (almost) every other day since.  He’s not thrilled about it, but he’ll sit through it.  He’s now two years old and even though his teeth would probably be in mostly good shape anyway, his vet always comments on how great his teeth look.  And his breath is pretty fresh too!

Many people will wait till their dog is a bit older and then take them in for an annual cleaning or dental.   This isn’t a bad thing and certainly is something that can be done, but it’s often unnecessary if you sjust tart brushing early.  It’s expensive and putting your dog under sedation shouldn’t be something taken lightly, especially with older dogs.  Start brushing early and often and this can usually be avoided.

Here are a few tips to make brushing your dog’s teeth successful:

At first, your dog isn’t going to cooperate and probably won’t stay still.  That’s ok.  Just spend a minute or two and work your way up.  Most dogs learn to eventually just sit still so they can get it over with.

It only takes a few minutes each day and it really can make a tremendous difference in your best friend’s overall quality of life.

What is the Best Dog Toothbrush?